How To Choose Your Air-Rotor Handpiece?

Air rotors are honourably the extension of a dentists working hand and the clinician today is extremely dependent on the optimal performance of his/her rotors to ensure a smooth functional practice. The dental handpiece of today is a sophisticated amalgamation of precision parts moving in seamless synchronization at extremely high speeds. This arrangement delivers a smooth, powerful cut that allows the clinician to stroke through hardened tooth structure with ease, leaving a smooth, clean preparation margin, with reduced trauma to the patient and the clinician.

Let us understand a little about how to choose an airrotor handpiece.

In order to be able to choose the correct high speed airrotor for the practice; it is imperative to understand:

a. The anatomy of the airrotor

b. How the airrotor functions

a. ANATOMY OF THE AIRROTOR

An airrotor consists of two main components: The outer shell, and The inner turbine

The outer shell is the long tubular portion that makes up the body of the instrument. This outer shell is further divided into head and sheath. The head holds the turbine and sheath forms the handle that harbours the air and water supply. 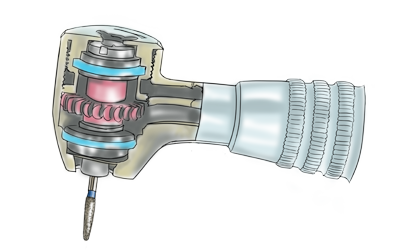 Outer shell is made in one of three materials:

The inner turbine cartridge is the workhorse of the handpiece sitting encased within the head of the outer shell. The rotary system consists of an impeller / rotor mounted on a spindle/chuck assembly supported on either side by precision ball bearings and suspension O-rings.

b. HOW DOES THE AIRROTOR FUNCTIONS?

As air from the compressor is introduced into the handpiece via the foot pedal, it gushes through the airline attached to the back end of the handpiece (i.e. coupling); from where it goes up through the handpiece shell into the head and is forced over the impeller of the turbine. As the impeller catches this air, it begins to rotate clockwise at high speeds causing the spindle to rotate with it (like a wind mill). The bur is physically locked into this spindle/chuck assembly thus allowing drive air energy to be productively converted into rotary motion setting the bur running.

Turbines rotate at speeds of about 400,000 rpm, faster than anything else on the planet. It is important to understand that not all these rotations reach the tooth.

Turbine speeds are categorized as free speed and active speed. Free speed is the maximum rpm with no load (bur is running free in air). Active speed is the actual speed the turbine is reduced to when the bur contacts the tooth structure (bur is actively engaged against the tooth). Most air rotors have an active speed in the range of 180,000 to 200,000 rpm (about half of the free speed) depending on the contact pressure. This is where the torque of the handpiece comes into picture.

“Torque” is the measure of the hand piece’s ability to remove tooth structure. The greater the torque available to operate the cutting instrument, the less physical demand is placed on the operator’s hand and wrist.

HOW TO SELECT AN AIRROTOR FOR YOUR PRACTICE?

When selecting an airrotor always keep patient and personal wellbeing at the forefront. Investing in an initial cost effective handpiece system may compromise patient health and invite occupational hazards. Cheap air rotors may quickly add up to become a significant capital expense in the form of repair costs.

Few factors one must consider when selecting an airrotor are enlisted below:

Small head size: improves visibility and access, especially in the posterior region and with children. However when a long bur is used in a small head airrotor; it can exert significant lateral stresses on the turbine reducing the life expectancy of the cartridge.

It is best to keep one of each head sizes; using the large head more routinely and switching onto a miniature head as and when access or visibility becomes a concern.

The typical handpiece head is angled back at 22.5 degrees. This ensures that the bur remains in line with the clinician’s sight. However, this can sometimes restrict access to posterior teeth (especially distal of maxillary second molars) by causing the back end of the handpiece head to come in premature contact with teeth in the opposing arch.

The base of the handpiece has holes; each of which serves a specific function

2 hole handpiece: Usually the standard in India where the large hole is for air and the smaller hole is for water. As there is no port for used air to escape such airrotors are loud.

4 hole handpiece: Usually the standard in the U.S. and Europe. It has two large holes for air intake and air escape which ensures less noise and allows the bur to halt faster upon releasing the foot pedal. The other holes serve the function of water intake and chip air which ensures the water jet escape as fine mist and not water droplets.

A simple coupler can be used to help convert a 2 hole handpiece into a 4 hole one.

Standard Screw-Type: The spindle and chuck are separate and a chuck device is used to insert and remove the bur

Push Button-Type: The spindle and chuck are a single assembly and a push button cap on the handpiece head is used to open or close the chucking mechanism. This is easy to use and time saving.

The heart of the turbine is the delicate ball bearings. Usually fabricated in either stainless steel or ceramic. Ceramic is usually the preferred choice as it is harder, weighs less with greater abrasion resistance and thus longer life expectancy.

The handpiece holding time (number of minutes the clinician spends holding a handpiece) constitute a significant portion of a functional day, and over the course of a career, long-term occupational hazards may manifest from holding an imbalanced airrotor.

When held in the functional position the balance of the handpiece should be neutral or slightly towards the handpiece head. A heavy handpiece may lead to early fatigue during procedure. Manufacturers are trying to work with lighter weight materials especially for the shell to help decrease the overall load on the clinicians hand when working for long hours at a stretch.

Handpiece shell can be either knurled or smooth. Most clinicians prefer the knurled finish as it improves grip with gloves. It is important that the knurling not be too deep or too close so as to compromise handpiece cleaning and sterilization

A water jet helps keep the prepared tooth cool and the helps evacuate debris from the work field. A multiport (usually three to four) spray emanating from the face of the handpiece is far superior then a single water port as they have a significantly higher cutting rate.

The multiport provides even distribution of coolant water over the entire surface of the tooth and prevents the water spray from being blocked when preparing the distal surface of a tooth or while removing temporary restorative material from an endodontic access cavity (a common problem with a single water vent).

The direction of water spray is very important. An ill directed port shoots water off the bur and air becomes the coolant which is ineffective in dissipating heat.

Handpieces are one of the most important workhorse systems in the dental practice. They have received immense attention in the recent past and never materials and techniques for fabrication show promise towards increasing functional harmony and longevity of these instruments.

Regardless of quality and price; logical reasoning behind choice of a high speed handpiece and a diligent maintenance protocol can go a long way in ensuring seamless functioning and quality driven dentistry. This article describes a few important aspects to be considered when choosing an airrotor handpiece. 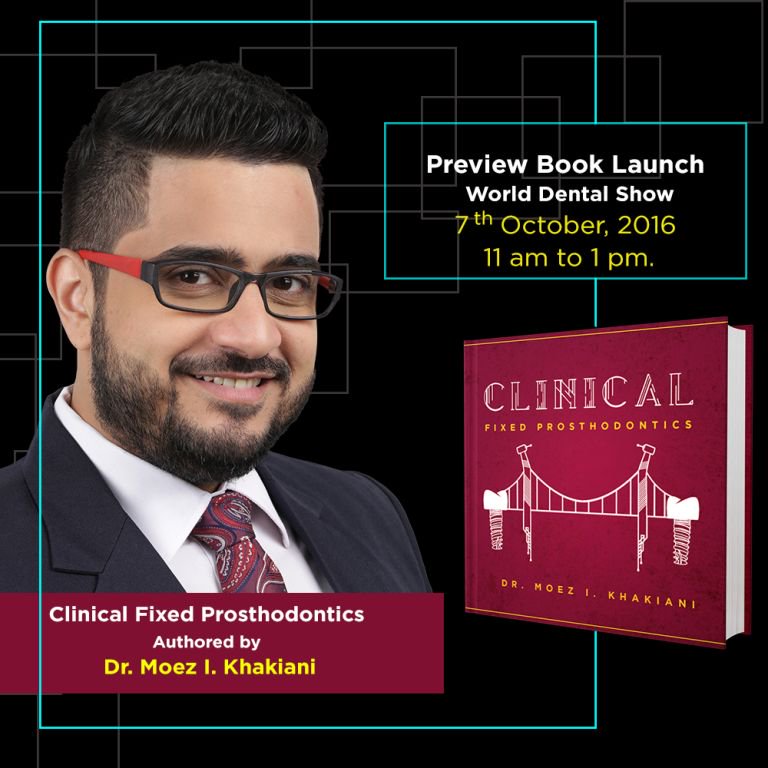 Top 10 Reasons Why You Should Pursue Dental Photography Daily

My Idea Of Being A Stress Free Dentist!